BGBS 011: Aaron Houghton | iContact | What Will It Cost You to Be Successful? 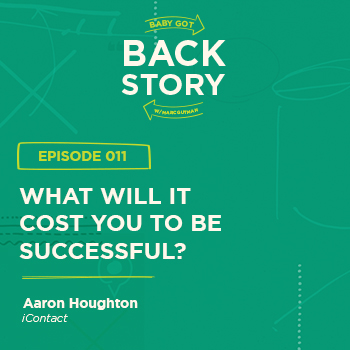 BGBS Episode 011: What Will It Cost You to Be Successful?

In the late 1990s, Aaron Houghton was one of those kids who had an interest in computers and a new phenomenon known as the World Wide Web. When he was 17 years old, he turned his solution for emailing bed-and-breakfast guests into a $180-million-dollar email marketing powerhouse. Eventually, Aaron sold his company, iContact. Despite such success and being at the top of his career, Aaron’s world came crashing down. He discovered the importance of self care and not losing sight of what’s really important. After all, if we don’t take care of ourselves and loved ones, then we won’t be around to share our successes. So, Aaron started to question what made him truly happy. What makes you happy? Make your own list!

“My dad must have planted a seed in my head at some point that this might be a better way to make money than mowing lawns.”

“I don’t think I had the confidence to think that I could…out solve everybody else.”

“I just felt like the wheels were falling off this thing. It wasn’t the business…it was me. I was just so in over my head.”

“Like a lot of entrepreneurs, when I felt the stress coming on, my solution was to work harder.”