BGBS 023: Callie Christensen and Kelly Oriard | Slumberkins | Believe In Yourself 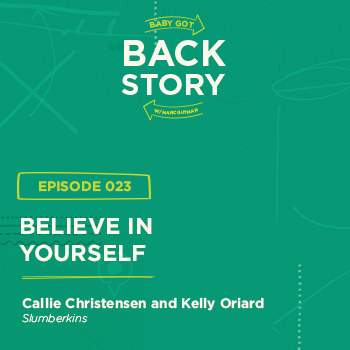 Founders and CEOs of Slumberkins, Callie Christensen and Kelly Oriard share how they started as two best friends telling stories of sloths and Bigfoot for fun and turned it into a multimillion-dollar business. This business is based on all-around storytelling. Stories have the power to provide meaning and clarity around some of life’s most challenging moments. These moms used their natural skills and expertise to equip parents with invaluable resources.  Find out how the two found themselves deconstructing plush blankets to pitching their business idea on Shark Tank, and everything in between.

Get ready to find out how storytelling changes lives!

Discovering The Power Of Storytelling As Mothers

Callie Christensen and Kelly Oriard became fast friends in high school, bonding over their tall stature, volleyball tryouts, and pronunciation efforts in Spanish 101. Their friendship continued to grow through college, shared interests as educators, and leaning on each other as they each became new moms. It was through these commonalities that they realized there was a need for resources to help parents emotionally support their children from an early age. Utilizing their areas of expertise, Callie, a special education behavioral interventionist, and Kelly, a counselor and family therapist, along with their personal experiences, the two brainstormed how they could equip parents with the skills to lead the sometimes difficult conversations with their children. As parents themselves, they thought of how valuable bedtime routines had become. These are moments when they could really connect and engage with their children. They also realized the power of storytelling and the messages that could be delivered. And so began the early stages of Slumberkins; plush toy creatures with corresponding stories that help facilitate authentic interactions between parent and child.

After realizing they may be on to something, the two borrowed $200 to purchase fabric and hand sew about 30 versions of their first edition of creatures. Binding the characters to their corresponding stories, written by Kelly and printed on cardstock, the two set off to sell their concept at a booth at their local holiday bazaar. They sold out quickly and returned home with $700. This process continued until they realized after buying out the local fabric store’s entire stock of plush fabric, that this was something bigger than they had originally imagined. Launching their business on Instagram and Etsy helped launch their “handmade side hustle” with access to an open market. They soon found themselves making an official pitch on Shark Tank. While it did not go as they had hoped, it really helped them take their business more seriously and give their business plan and mission the attention deserved. They realized what differentiated their product to the many other plush toys out there were their therapeutic storylines, and really connecting to their consumers.

Today, Slumberkins is a multimillion-dollar business with 20 employees and over 60,000 customers. They are currently talking with the Jim Henson Company to produce a children’s television series based on the Slumberkin characters. With the business steadily growing each year, the part that the duo are most proud of is their ability to connect with parents, teachers, and caregivers. Slumberkins has a Facebook social group where their consumers can connect and grow together. Callie and Kelly are having the most fun working together, something others warned wasn’t possible for best friends. They’re enjoying proving those doubters wrong and helping Bigfoot feel good about himself.

Let’s all say it together: “I am strong. I am brave and unique. The world is better because I am here. I like me.”