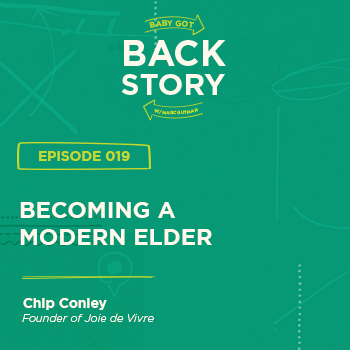 How a passion for hospitality, writing, and business fueled Chip Conley to start (and eventually sell) the global boutique hotel group, Joie de Vivre, only to find himself as the “Modern Elder” at a crazy, high growth startup called AirBnB, and rediscover what it was he was always meant to do…

At 52 after selling the cool and rebel hotel brand he had started at 26, he could have retired. By today’s standards he should have retired… but the young founders of Airbnb came calling. He served as Airbnb’s Head of Global Hospitality and Strategy for four years — while also being CEO Brian Chesky’s mentor — and continues today as a Strategic Advisor to the company’s leadership.

Chip Conley is a New York Times bestselling author whose manifesto on ageism, Wisdom@Work: The Making of a Modern Elder, is inspired by his experience of being both a mentor and an intern in his 50s.

[16:07] “If I was going to start my own thing in the future and learning from somebody’s already doing it, it’s probably the fastest way for me to learn.”

[19:14] “I sort of history of proving people wrong and doing something that seems a little odd at first, but it turns out it’s ahead of the trend.”

[22:14] “There are very few companies whose mission statement is also in the brand name.”

[40:16] “I came to realize we were not in the Boutique hotel business, but we were in the identity refreshment business.”

[55:27] “What’s important to hear here is that the social narrative which is, you know, you hit your midlife crisis and then it’s all downhill from there, it’s not actually accurate.”

[58:50] “A musician must make music, an artist must paint, a poet must write, if he is to be ultimately at peace with himself. What a man can be, he must be. This need we call self-actualization… It refers to man’s desire for self-fulfillment, namely to the tendency for him to become actually in what he is potentially: to become everything one is capable of becoming.”