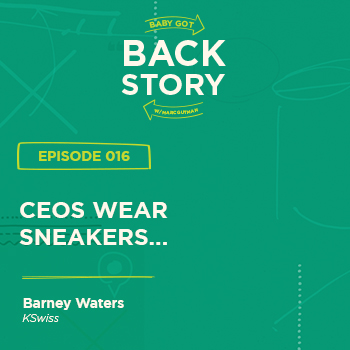 Barney oversees all aspects of K-Swiss, the global sneaker brand, having taken over as President at the beginning of 2016 with a goal to bring the 50 year old brand back to prominence and profitability. Barney has driven fast change both internally and externally, and created a breakthrough brand position around entrepreneurship and brand transparency. Barney has also been Vice President of Marketing for heritage boot brand Palladium, overseeing the brand’s global re-launch and all aspects of brand communication. Prior to Palladium Barney was based in Boston as Vice President of Marketing for PUMA North America during the brands explosive growth period. Now based in new offices in DTLA, Barney is originally from London, England and has been in the footwear industry for over 15 years.

[03:48] “I just love the fact that you’re actually sort of the chess player. You’re the one who’s sort of scheming and calculating and trying to read the market and put together the plan, and I like that.”

[17:29] “I could have told a great story about how we’re the number one best running shoes for marathons, but if that wasn’t what the market was buying, then I have a great story that’s irrelevant in terms of selling shoes.”

[22:50] “…look, product sales and marketing have to be aligned. In other words, if marketing creates an amazing campaign and gets a ton of eyeballs and then that consumer goes to the mall at the weekend, but there’s no case wishings in the stores, then that brand awareness cannot be converted to a sale.”

[23:09] “…you’ve got to be careful that you’re not, marketing isn’t generating demand. That can’t be fulfilled because sales, hasn’t been aligned on the plan.”

[25:38] “I mean, that’s probably one of the things about having an older brand is the good news is that people really like and trust in the longevity of a brand,  that the downside is, you’ve got this baggage because it’s hard to change the perception of that brand because that perception of the brand resides in somebody else’s mind, not in yours.”

[38:20] “I think these days branding is becoming much more important for companies. I just feel like we always pick our presidents or CEOs from the commercial side, either the CFO or the head of sales and brand is probably the most important thing now because, there’s parity in features and functions.”