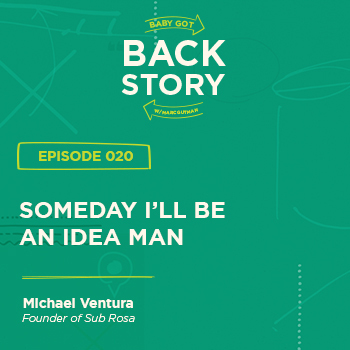 How adopting other people’s perspectives allowed Michael Ventura to discover that empathy is the secret to success and build a world class strategy and design studio serving the world’s biggest brands.

Michael Ventura is the founder and CEO of the strategy and design firm, Sub Rosa based in New York City. He is also an expert on empathy and practicing empathy in business in order to produce real innovation. Later in the show we’ll hear Michael’s definition of empathy… how most people get it wrong and how applying empathy is the secret weapon for any business looking to innovate.

Quotes:
[7:38] “Then that night she said, when she laid in bed with my dad, the two of them were talking, they were like, what the hell is our kid talking about that he wants to be an idea man, he’s nine years old? What does that even mean?”

[18:12] “What I ended up doing pretty quickly, was actually starting a business with a friend of mine where we were doing events at different nightclubs and bars and restaurants, which probably you’re not supposed to do when you’re 19, but somehow we got away with it.”

[27:09] “I knew if I was going to turn this business into what I wanted it to be, I was going to have to get some humility and go have uncomfortable conversations. But it proved to be the best thing ever.”

[30:35] “I think that any good culture inside an organization operates like a magnet and if it is going to attract, but it’s also going to repel and places that are, something that for everybody, usually don’t have a strong point of view on themselves.”

[32:02] “It certainly wasn’t learned in a academic or in another employer’s setting, right? It was, it was learned on the battlefield, which I think is actually the way you learn the best. At least is the way I learn best because theory is great, but you know, theory goes out the window the second you get out in the real world and you see what works and what doesn’t actually, right?”

[38:24] “Empathy unto itself is really the act of perspective taking.”

[47:03] “Most people do think empathy equals being nice right? And so when you go in and you talk about empathy in business, people are like, Oh God, like more HR training, you know? And they’re not thinking about it like, oh, this might actually help us sell products differently or understand customers better or be able to retain our top talent or longer.”