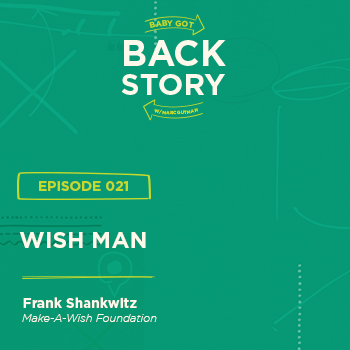 Creator and Co-Founder of the Make-A-Wish Foundation, Frank Shankwitz is sharing how he went from humble beginnings and living in a campground as a child to becoming an Arizona State Trooper and having a near-death experience to becoming one of Forbes Top Ten Keynote Speakers and helping grant wishes of terminally ill children. Frank’s story is like no other you have heard and is filled with inspiration and motivation to do good. The recipient of numerous awards and now the basis for the motion picture “Wish Man,” Frank has been changing the lives of children around the world for 40 years. He’s sharing the most important life lesson he learned as a child and how giving back should be a constant practice for all.

Prepare yourself for the most incredible and inspiring story you will ever hear.

Frank Shankwitz’s Story: From Campground Living As A Child To Granting Wishes

At the age of 5, Frank was kidnapped by his mother and moved to a campground for 5 years, until they made their way to Arizona. It was at their new home in Arizona that Frank met Juan who was a father figure to him and instilled the important life lessons of turning negatives into positives and the importance of giving back to others, even if you can’t give with money. Frank went on to serve in the US Air Force and later became an Arizona state trooper. It was while on the job that Frank was hit by a drunk driver and pronounced dead at the scene…until a passing-by nurse performed CPR on him for 45 minutes. It was then that he knew God spared his life for a reason and it was up to him to discover what that reason was.

The Story Of How Chris Got His Wings

In April of 1980, Frank received a dispatch call that he was to meet a helicopter carrying a 7 year old boy named Chris who had terminal leukemia. Chris was a big fan of the TV series CHiPS and wanted nothing more than to be a motorcycle officer like Ponch and Jon. Frank was his dream come true. Frank made it his mission to ensure Chris received a custom made uniform and upon delivery, Chris noticed the wings Frank wore, as every officer does. Chris said he wished he could have the same wings and it was that moment in which Frank realized the importance of a child’s wish. Chris received his wings along with wings that carried him to heaven. It was on Frank’s trip home that he realized that he wanted to make the wishes of more children come true.

Wish Man: The Creation Of The Make A Wish Foundation

Frank decided he wanted to find out what it takes to create a non-profit organization and since computers had yet to be available, he researched everything he could at the library. Frank enlisted the help of Chris’ mom, Linda Bergendahl-Pauling and with 3 others they formed the 501c3 that we know today as the Make-A-Wish Foundation. The first official wish was granted in March 1981 to Bopsey who wanted to be a fireman, ride in a hot air balloon and go to Disneyland. Today, a wish is granted every 28 minutes and over 500K wishes have been granted in the past 40 years.

Are you turning your negatives into positives?