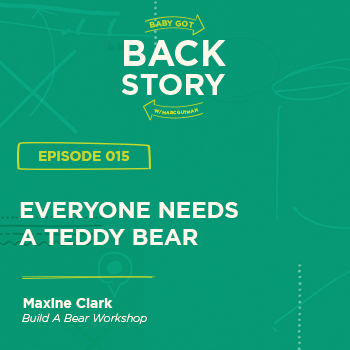 Maxine Clark is one of the true innovators in the retail industry. During her career, her ability to spot emerging retail and merchandising trends and her insight into the desires of the American consumer have generated growth for retail leaders, including department store, discount and specialty stores. In 1997, she founded Build-A-Bear Workshop®, a teddy-bear themed retail-entertainment experience. Today there are more than 400 Build-A-Bear Workshop stores worldwide.

Maxine Clark is the founder of Build-A-Bear Workshop & Chief Executive Officer of Clark-Fox Family Foundation. She’s made many impressions with her skills and abilities to have the vision of the consumer and her unique strategies when it comes to branding. While working her way up the chain in her career path, Maxine, at age 48, successfully managed to structure, build, and grow her billion-dollar company based on hugs and love…

[17:03] “So I just really was able to know pretty firsthand what the customer was looking for. I had good instincts about that.”

[25:37] “You have to constantly be innovating and that’s what made retailing so successful.”

[26:37] “We do need to do a better job of connecting young people with talent and ideas to people who can execute it.”

[29:56] “Curiosity is really what made the world what it is today. Somebody thought there could be something better and they invented that better, and that’s what we’re all prospering from.”

The Bear Necessities of Business