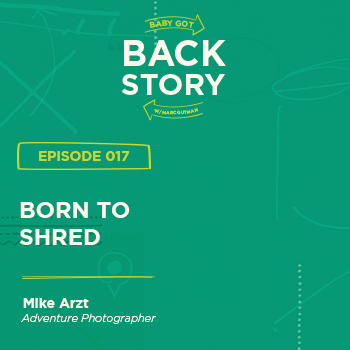 “One of my favorite sayings about entrepreneurship is: If you want to understand the entrepreneur, study the juvenile delinquent. The delinquent is saying with his actions, “This sucks. I’m going to do my own thing.” Since I had never wanted to be a businessman, I needed a few good reasons to be one. -Yvon Chouinard

In this episode you’ll hear a story of how a passion for snowboarding, photography, and entrepreneurship positioned Mike Arzt to travel the world, chase snow and become one of the most successful photographers in the snow industry.

The Japanese have a concept “eye-ki-guy”(Ikiagi) that means “a reason for being.” The word “ikigai” is usually used to indicate the source of value in one’s life or the things that make one’s life worthwhile.[1] The word translated to English roughly means “thing that you live for” or “the reason for which you wake up in the morning.”[2] Each individual’s ikigai is personal to them and specific to their lives, values and beliefs. It reflects the inner self of an individual and expresses that faithfully, while simultaneously creating a mental state in which the individual feels at ease…

If that’s not the definition of Mike Arzt, I don’t know what is…

Mike is generous, relaxed, and intense at the same time. He’s been through a lot going through many career journeys. He chases snow like he’s independently wealthy and works at his job like he doesn’t know where the next dollar or meal is coming from.

Mike is a personal dear friend in my life and I am proud to have him as a guest on the Baby Got Backstory.

Quotes:
[9:02] “The master in the art of living makes little distinction between his work and his play is labor and his leisure, his mind and his body, his education and his recreation, his love in his religion. He hardly knows which is which. He simply pursues his vision of excellence at would ever, he does leaving others to decide whether he is working or playing. To him, he is always doing both.”

[20:50] “I think this is that part of, you know, do you even call snowboarding a sport or I mean people are as passionate about hunting or are so many things right, that are hard to explain to other people how it drives you that much.”

[38:54] “That was one thing my parents did push me on. I think I was down in one last class and I heard a lot of like, could you please just get that diploma and be saying like hasn’t really gotten my way yet that I don’t have it.”

[45:39] “I love that there’s just certain people and random things that happen in life that completely change your course.”

[74:21] “I just did everything I could to hustle and try to make the commitment at that point that I wasn’t going to go chase an in house job again. I was going to try to do it all on my own.”

[77:33] “Hellbrook has never been about a place. It is about a feeling, a philosophy, a goal, a friendship, new friendships, passion, fear, excitement, new challenges, failures that result in a desire to do better, a dream. It is about life and what we want out of it. Hellbrook is different to everyone, but our goal is to create an environment that helps everyone find his or her own “Hellbrook”. If Hellbrook is the same experience each time you go there, we have failed. Hellbrook cannot be static. Hellbrook is about getting up earlier, hiking harder and faster to get their first. You could wait for someone else to come down to tell you it sucked, but you would never hit the major score. If you get up first, hike faster only to find out it’s not good, what should you do next time? Get up first, hike harder and drop in first. There are many people along the way that help you find Hellbrook. Some may play only a small part, but you would never find it on your own. Welcome to our Hellbrook.”

[100:22] “You’re surrounded by good people and people that believe in you and tenants that want it to work and you figure it out and a lot of people along the way teach you and you make mistakes and you just keep pushing through it. But sometimes if you don’t know how far in over your head you are, maybe got a better, better chance of getting back out.”

[108:31] “You know, it’s cool to have photos of the pyramids in Egypt or you know, other famous landmarks or beautiful scenes but, what really stands out is it’s the shots of the people and some of the other stuff that was happening that are those super super memories.”